skip to main | skip to sidebar

hey!  i'm over here now
http://angeliccorn.wordpress.com/
we'll see how it works out...
Posted by kelly at 8:52 PM No comments: Links to this post

i have, to my own chagrin, the song "rock me sexy, jesus" running through my head most days of the week.

i am smitten with smittenkitchen. i just made grapefruit yogurt poundcake, and i am in the middle of making kefta and zucchini kebabs. it smells so good i want to eat the meat raw. but i won't, i promise. i wish i had more pictures, but i cook in the later evening and it's dark when everything's done.

i just heard a good joke. it's not only that was bush born on third and thinks he hit a triple, but bush came into the office on third and then stole second. i'm listening to the speeches at the dnc on the radio. i'm pretty sure that most people reading this are republicans, so sorry.

i went back to school august 11th, school started the 19th. it's always a busy time. the counselors have to set up summer school before we leave, so it's hard to prepare for the beginning of school, and since i've been there, the schedules haven't been "loaded" until we get back from summer, so there is tons and tons of work to do in less than a week. i worked last saturday and sunday, trying to get everyone's schedules fixed before school started. maybe i was a wee too enthusiastic, because i completely strained my wrist, giving myself tendonitis, or wrist strain, unspecified. i like that phrase, unspecified. it's much more upscale than random. random has gone the way of totally. they used to be legitimate words, now they're just valley girl speak.

some one threw away these old athletic bags at school, and someone else dug them out of the trash, washed them, and gave them away at the staff party on saturday. i was pretty pleased with them and snatched two. there were extras...i don't think everyone appreciates the vintageness of them. 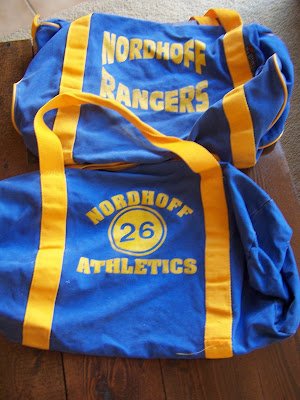 this is the fate of most of brophy's toys...poor little bear. 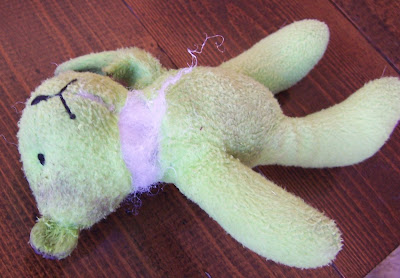 things that make me feel lucky, even when i'm drowning in work and bothers like check-engine lights and fleas on the dog

ordering a 4' shelf from pottery barn with gift cards leftover from my wedding almost 2 years ago, and finding that they were worth almost 3 times the amount i thought (even though i intended to buy a bathroom light fixture that we picked out months ago only to find out it's no longer available.)

driving by the ocean twice a day, but getting the best view on the way home from work, which is amazing every single time. it's been looking especially aqua lately, which is my most favorite color.

having the check engine light turn out to be nothing, and not even getting charged for the service guy to figure that out.

not seeing a flea in two days.
Posted by kelly at 7:54 PM 3 comments: Links to this post 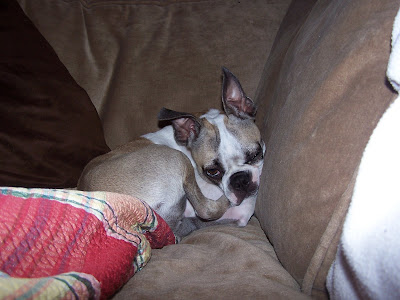 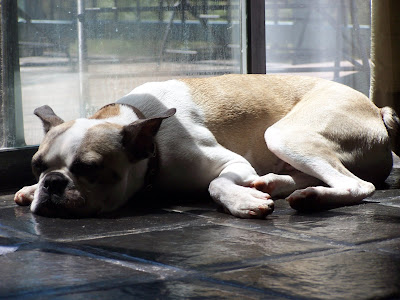 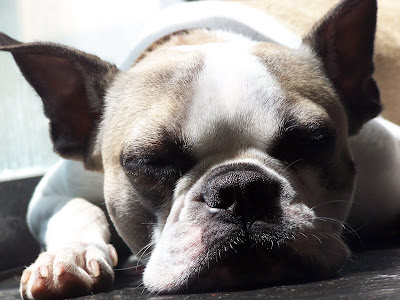 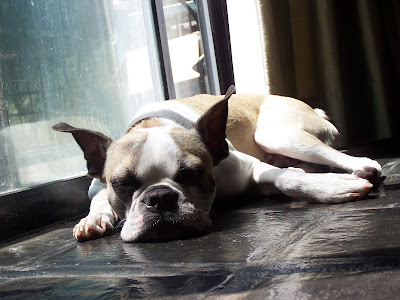 so, it's no secret that i love my puppy, brophy. if you have seen us together recently, you may have been slightly sickened at how gaga i am over him. yust a widdle bit siwwy, i am. but, it's not just me, i swear! over at the breeder's from whence brophy came, they are trying to make their own brophy! they are breeding his mother and father together again trying to duplicate the cuteness and sweetness that is my pup. check it out! read about his mom and dad, then click on the link to see her past litters and check out their tribute to brophy. brophy's kennel name was adonis (appropriate), and clearly, he was the pick of the litter.
Posted by kelly at 8:49 PM 1 comment: Links to this post 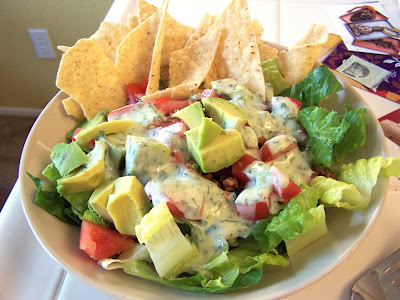 taco salad is one of those dishes that i remember as being such a treat growing up. the last few times i've made it, it's been nothing special, but i wanted to make a really good one this time. i think jake and i both agree that i succeeded. wildly.

recipes are difficult to write, because if i don't make it all up, i use a mixture of recipes i find online and adjust them as i see fit. i'm sure you do the same. especially for salad, you don't need to measure, you just use as much of each ingredient that you think is good, or how much you actually have. aside from the salad dressing, such is this recipe.

dressing, adapted from martha stewart:
3/4 cup lowfat plain yogurt or light sour cream thinned with milk (i tried both, they taste about the same)
half cup cilantro, very finely minced or just throw all dressing ingredients in the blender
salt
juice from half a lime
a wee bit o' very finely minced jalapeno...i started with about a teaspoon because i didn't want it to be too hot, and it was enough to make it very mild.

so, when i make taco meat, this is how i do it: cook the onion, super finely chopped, and minced garlic in olive oil until very soft (medium low heat) add turkey, salt it, and chop up so it's finely crumbled when cooking is complete. brown, drain the fat. i use a ratio of two parts cumin to one part each chili powder and cayenne pepper, differing amounts depending on how much meat i'm cooking. about two T of cumin for a pound of turkey (or beef). then i add about 3-4 T of unauthentic la victoria red taco sauce. for the salad i added the beans, probably about a cup, just until it looked pretty.

then i just piled the meat/beans on some lettuce, added some corn, tomatoes, half an avocado for each of us, dressing and crumbled up chips. i bought some cheese (pepper jack) for it, but i think it was complete without it!
Posted by kelly at 7:50 PM 4 comments: Links to this post so, five years ago today, i met jake at Q's in santa barbara. holly and i went downtown for fiesta.
it turned out that jake knew a co-worker of mine and had watched her baby for her. though this is the only time in his life he has ever baby-sat, holly misunderstood what i told her and assumed i was interested in dating a "manny."

but it did give him some credibility with me, so i gave him my phone number before we left.

i was super excited because he was cute, tall and smart.
i really wasn't expecting to meet anyone
of that description!
Posted by kelly at 1:20 PM 2 comments: Links to this post "my neck is a gargantuan monkey fist."

first person to identify who said that wins my undying respect....

Posted by kelly at 7:23 PM 2 comments: Links to this post kelly
a nerd. i like reading, and lots of it. i read books over and over, and have a hard time getting rid of them. i don't go to the library anymore, because i've exhausted all branches to which i don't owe fines. i also have a lovely husband, a ferocious, lizard-killing cat and dreams of becoming a really good cook, owning a boston terrier, writing my own book,traveling to ireland, and a car with gps and remote keyless entry.